Till The Morning Comes ….

By mid afternoon, the rain had tapered off, at least temporarily, and Connecticut’s own Kung Fu was tearing it up on the Green Vibes stage. This local supergroup of musicians has been developing a following fast through its voracious performances. Tonight was no exception. The showed outstanding chemistry and an incredible tight bond with simple gestures in each others directions. Kung Fu easily drew one of the largest crowds to the Green Vibes stage throughout the first two days.

Guitarist Bob Weir booked his performance as a trio, including Bruce Hornsby and Banford Marsalis; that’s guitar, piano and Saxophone, not your traditional trio line up. The proceedings had the feel of a Bruce-centric performance, opening up with his own “To Much Monkey Business,” a jazzy, New Orleans swing thing, and he tore his way through a Dr. John styled piano solo. Bobby’s “Darkstar” brought a cheer from the faithful, and there was all sorts of free form, extended improve amongst the three.

And then it began. Percussionist Sonny Emory, of Hornsby’s band The Noise Makers joined the trio on stage with a washboard, and then the rest of the Noise Makers completed the line up. The dove head first into “Might As Well Be Me,” a new Hornsby tune he’d recently completed writing with Dead lyricist Robert Hunter. Weir’s “Me and My Uncle” had added southwestern flare with this band behind him and closer “Playing In The Band” took on a cajon flavor.

The night’s headliner however, was the act the VibeTribe came out in full to see and hear perform. Phill Lesh and Friends took the main stage at 9:04 p.m. and fiddled around for nearly 12 minutes before opening with an improve jam that moved into a riveting take on “Till The Morning Comes,” with multiple harmony vocals, setting the bar high for the rest of the two sets, despite the now pouring rain. 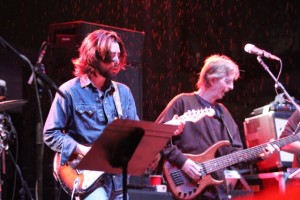 Phill’s always been a mentor of young talent with his band, tonight he brought along not only his two sons, Grahame and Brian on mandolin and guitar, but also everybody’s drummer of choice Joe Russo, guitar phenom Jackie Greene, and Larry Cambell and his wife Theresa Williams, and pianist/keyboardist Jeff Chamenti. The vocal tone and chemistry amongst Williams and Cambell, Greene and the Lesh trio, evidenced on this opening cut, was apparent from the get go and throughout the performance. 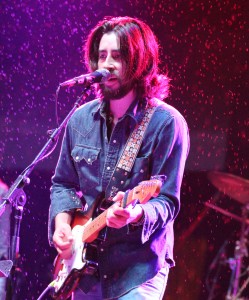 They traded lead vocals one to another, and Greene’s “Gone Wondering” and “Tell Me” showed the progress he’s made as a singer and player. With Cambell and Williams on hand, both also part of the Levon Helm Band, The Band’s “Up On Cripple Creek” along with the Dead’s “Tennessee Jed” – which Helm has recorded – was another graceful tribute to the late musical Icon, and played with lively, upbeat tempo,

The second set was every bit as rousing. Russo was pounding the skins with a fierce voracity on “St. Stephen.” And the vocal harmonies were in full regal on “The Wheel” and on “Scarlet Begonias.” Greene absolutely belted it out on a new tune of his own, “So In Love,” showing great dexterity in bellowing, higher notes. “I must confess, this really has become my favorite festival to play,” Lesh said before bringing the show to a spirited close with the classic Dead cut, “Shakedown Street,” sending us back to our campsites or to late night activities.

Good night for now VibeTribe, well be back in a few hours with reports on early sets from The Ryan Montbleau Band and more.