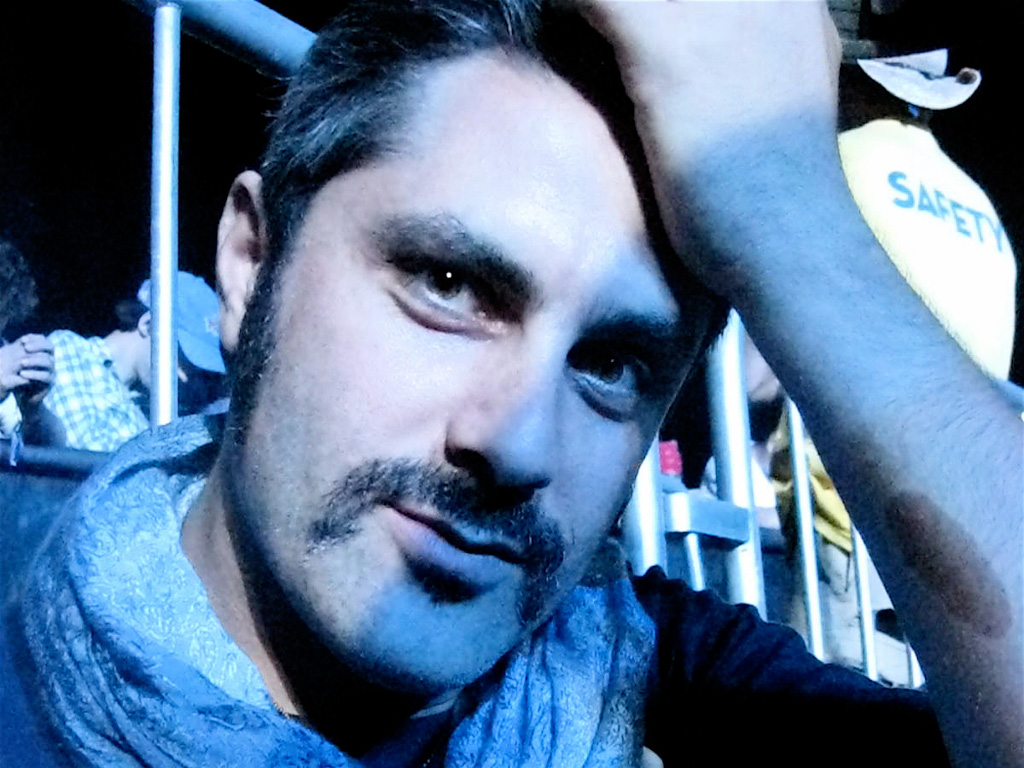 Saturday at 5:00 AM on the Silent Disco

MoPo is a master craftsman and his building material is the world’s most precious commodity: TIME. Consider yourself fortunate If you get a chance catch a Motion Potion DJ set these days. An enormous amount of thought, planning, and scheming has to occur to make them happen. MoPo approaches his shows like a college professor, or a football coach, putting hours of preparation and thought into exactly who will be listening, and how exactly to reach into their souls. Every set is different, and each can unfold in hundreds of different ways, and this intense focus on preparation makes him so versatile, so intense, and so much damn fun. These are “DJ sets” in the classic sense, unfolding like poems with every song a word and every mix or drop a bit of punctuation. Once known as the “DJ for people who hate DJ’s” it would be more accurate to say that this is the DJ for those who love live music.

Some artists choose their craft, some are born to it, and yet others find that their path chooses them, almost by some accident of fate. For Robbie Kowal that accident took place in the summer of 1995 when seeking part-time employment in the Greek Islands to finish a book he was writing. Asked to substitute for a club’s regular DJ for a week, he was shocked when the club owner fired that DJ and hired Kowal instead. The next 180 days granted him less than 60 records to work into 178, 5-hour, marathon nights of music, and only two exhausted days off. His material was limited, the gear was terrible, but the challenge led him to a cross-genre aesthetic that has defined him ever since, and earned him a passionate fan-base. Called “The DJ for people who hate DJs” by SF Weekly,MoPo’s willingness to literally explore any type of music, has made him the subject of experimental whimsical missions for many a promoter and led to yet further esoteric musical avenues of his own divination.

But in the beginning it was always about the FUNK. It was the funk he fell in love with as a college student in New Orleans in the 90’s learning to dance at local brass band shows. After going to Greece in ’95, being Shanghaied into the world of DJing and a few others pitstops, MoPo landed in San Francisco in 1997.T o his great surprise, his fresh, genre-bending style soon landed him his first residency at the legendary SF dance dive Nicky’s BBQ. His Thursday Whatdafunk residency lasted more than 6 years in which time his study of the funk in all its forms reached an almost obsessive, fetishistic level. Combining his love of writing with the residency, MoPo would prepare and deliver a weekly “Whatdafunk Newsletter” to educate the visitors on the night’s focus, whether it be “Bootsy” “Earth Wind & Fire” “Latin Funk” or “Child Stars: Michael vs Stevie” etc etc. The night eventually morphed into a Friday night residency devoted to underground hip hop known as The Real.WhatDaFunk Newsletter became an email list, which soon had thousands of followers and suddenly MoPo became one of the Bay Area’s early intraweb tastemakers.

Not satisfied with simply playing the music of his heroes, he co-founded the SF Funk Festival to bring them to SF, which led him also to co-found Sunset Promotions (nowHUSHconcerts ). Since the 1997 founding, Sunset has produced over 1000 concerts and operates not only SFFunk but also legendary New Years event Sea of Dreams , the Halloween artfest Ghost Ship and North Beach Jazz, All Shook Down and Spectrum festivals. Through it all, he satisfied his passion for the funk by working with, among others, James Brown, Parliament Funkadelic, Bootsy Collins, Morris Day & the Time, and producing reunions for Fred Wesley & the JB’s, the Family Stone and Mandrill.
His passion for psychedelic rock made him the first DJ asked to play seminal rock festivals such as High Sierra and Gathering of the Vibes and earned him invitations to play Jamcruise II and dozens of Phish, Allman Brothers, and Widespread Panic after-parties in New York’s vibrant post-Wetlands jamband scene. This led to the Syn parties, where MoPo spent months gathering, studying, and experimenting with the live-recordings of the new generation of psychedelic rock acts like STS9, Disco Biscuits and of course Phish. In time, this, and his deep skills with funk, soul and disco would lead him to an invitation to play the Bonnaroo Music & Arts Festival in 2002, an invitation he would have the honor to receive for a record 9 consecutive years. But from 2002-2004, MoPo was the festival’s only DJ, rocking 5-hour nightly sets in the Arcade. In 2005, Bonnaroounveiled the USA’s first Silent Disco production and MoPo was the guinea pig, beginning a passionate love affair with the emerging technology that would last to this day. His 2007 launch of the massively successful Silent Frisco is a testament to his passion for the format.

2004 also led him back to the Burning Man Festival where he was faced with his first real artistic roadblock. Literally dragged to this hotbed of progressive club music to play rare groove and hip hop, he found himself under-armed for a world that bopped hardest at 4am. Said MoPo “I remember wishing I had harder, faster, and bigger tracks and, really for the first time ever, feeling a bit underwhelmed by the funk. I felt like I had brought a knife to a gunfight.”

The experience sent him on a deep dive into electronic music, searching for answers to his “need fatter funk” dilemma. Not satisfied with simply playingstraight-up EDM records, he dug far and wide for tracks that could bridge the gap between his funk/rock style and the newer beats that propel the late-night. Thankfully, this search coincided with many a technical and artistic development, including the one that brought such funk/rock/disco-drenched producers as LCD Soundsystem, Unkle, Kraak & Smaak, and Fort Knox 5 to the forefront. The development of tempo-taming production technology like Ableton Live led to an explosion of mashup/remix culture that has since allowed MoPo to stay thematically on mission but tether his funk, rock, and disco to beats and bass-lines as fat as any.

With these production tools at his command, in 2004, MoPo unveiled his own first tentative, somewhat raw attempts at production. Although his skills were crude, the arrangements were born of a decade of DJing and thus many of the mash-ups, cut ups and remixes he released at the time found huge regard. Among them were the first of his many Radiohead-related releases “Just Break” which was featured on BootieUSA’sseminal The Best Mashups in the World Come from San Francisco. His annual trips to Bonnaroo led to tracks based on the festival’s lineup including work devoted to Phish, Widespread Panic, Dave Matthews, and Buffalo Springfield, all of which would be released as the “Bonnaroo Bangers ” compilation.

Other, more advanced explorations saw him focus tracks around themes of specific emotions or settings. Thus emerged Saturdazed, featuring 7 different Saturday-related samples or the breakbeat workout Conflageration which uses6 different tracks about fire. All of these would be featured on the 3-EP series he released on 2008 entitledElectric Nostalgia Vol. 1-3. This propelled more than 3 years of touring (while simultaneously running both SunsetSF and launching Silent Frisco). The progressive rocker now found himself invited for the first time to electronic festivals like Shambala,Camp Bisco, and WMC Miami. Clubs in Spain, Holland, France, Germany, and more than 40 US States welcomed MoPo and his enthusiastic, eclectic and inclusive approach to dance music.

To some degree exhausted by this pace and the 2010 loss of his beloved mother, MoPo decided to spend more time in San Francisco, which led to further focus on Silent Frisco and SunsetSF. A 3- year run in a monthly Silent Frisco residency in Santa Monica led to deeper investigations of the music of Radiohead, James Brown, Widespread Panic, Talking Heads and P-Funk and planned EP releases and mixtapes to deal with each. In 2015, he merged SunsetSF and Silent Friscoand launched HUSHconcerts .